Weapons for Dauntless is a type of equipment used to inflict damage on enemies. Players can improve their weapons via Crafting by adding Items they harvest from Enemies. Each weapon can be imbued with Aether to enhance your power in different ways. Infuse your strikes with these elemental abilities and even the odds against the behemoths of the Shattered Isles. 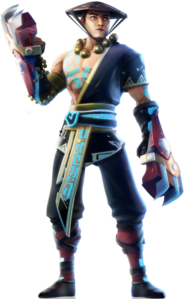 A fist-style weapon empowered by aether. Land successful combos to activate mantras that can buff teammates, brutalize enemies, and turn the tide of battle.

A heavy hitter for the tactical Slayer. Channel your hits to build up meter, then unleash to trigger a special attack buff. Stack it up to three times for maximum damage.

Fast hitting dual blades with S+ mobility. Swing the blades from their chains to slash from a distance, or pull yourself in for an up-close assault.

A lethal union of cudgel and cannon. Use the maul to splinter bones and scales, then finish things off with a blast from the cannon. You can even leverage explosions to dodge.

A fully-ranged option for the fleet of foot. Dance the line between close and long range as you dish out damage, buffs, and traps.

A classic weapon that shines in close quarters. Slash and slice to build your meter, then let loose with a burst of speed. An excellent choice for severing parts.

A gradual build with a powerful payoff. Inflict tactical wounds to build up your meter, then pack that power into devastating mortar rounds. The more you store, the more they hurt.

Song of the Shrike

Flight of the Shrike

Fall of the Shrike

* For this section we will be listing the parts indicated for the Ostian Repeaters. These parts consist of the Barrel, Chamber, Grip, and Prism that Slayers can mix and match to create a unique type of Repeater.

Cry of the Shrike

Scream of the Shrike